Home ›› Blog ›› Voluntary or Not, We Now Are All Learning the Greek Alphabet

Voluntary or Not, We Now Are All Learning the Greek Alphabet

It probably wasn’t World Health Organization’s (WHO) original intention for the Greek alphabet to gain this much attention linguistically.

Since the outbreak of COVID-19, we have seen five reported variants of this disease. To avoid stigmatization of the countries where these virus mutations took place and to avoid discrimination against people from those areas, WHO announced in early 2021 that to replace the old habit of naming diseases with geographical regions, these virus variants would all be referred to using letters in the Greek alphabet as a step forward.

Hence, voluntary or not, people have all since involved in a massive group learning the Greek alphabet amid COVID-19.

The unparalleled attention given to this naming system started from the reasoning behind this choice. Apart from the ethical aspect of avoiding stigma and discrimination, this practice also comes with practical benefits: when countries try to avoid being blamed for a disease, they typically fail to report local cases. Disassociating diseases with countries would also reduce the withholding of information and allow doctors to trace the viruses’ origins faster. Then, among the other options of pseudo-classical names, names of plants, fruits, religions and Greek gods, the Greek alphabet was selected to make the names easy to pronounce and to use.

From alpha to delta, the Greek alphabet seemed to have blended well into people’s daily conversations. That is, until Omicron came into the mix.

Following the issuance of the new name were a number of articles providing tutorials on how to correctly pronounce the word. “Linguist experts have identified four different common pronunciations of ‘omicron,’” wrote one website. “Experts have said there isn’t one right pronunciation.”

A British news platform did a thorough research, and found that from “OH-mee-kraan,” “AH-muh-kraan” to “o-MIKE-Ron,” different credible online sources have given different guidance. 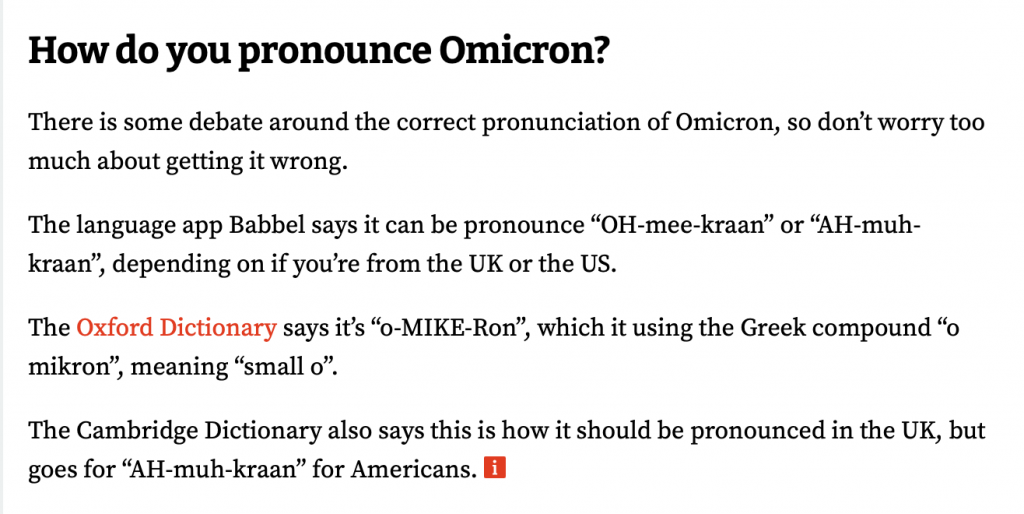 Nonetheless, “omicron” has already become one of the year’s most mispronounced words in the English-speaking world. While having a different pronunciation between the British and American, the word has been widely mispronounced regardless of nationality. 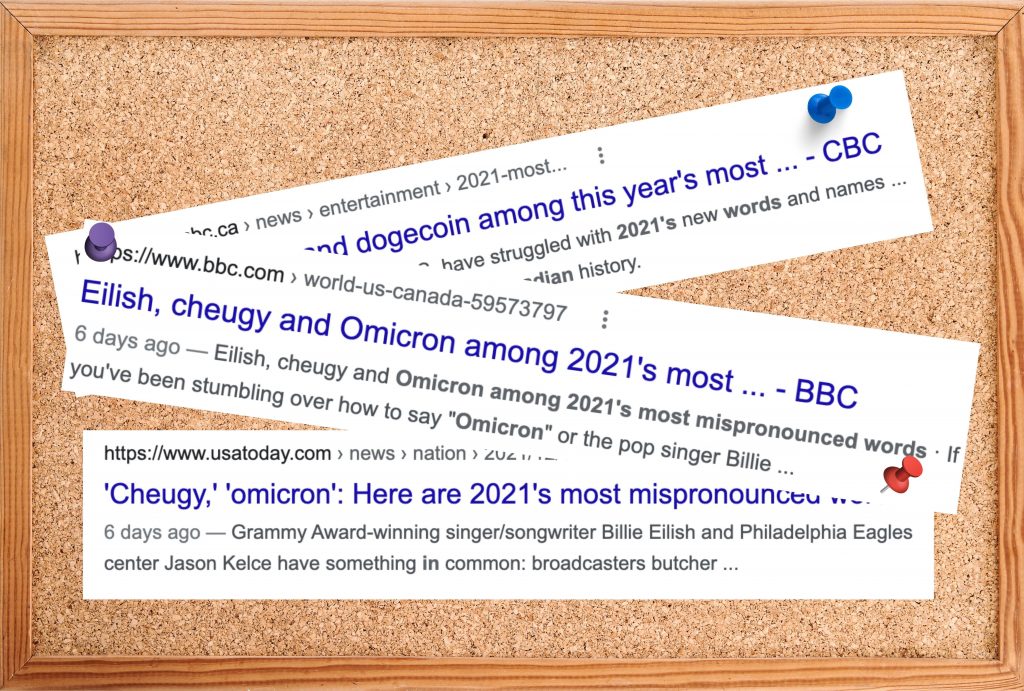 (Regardless of nationality, people are mispronouncing “omicron.”)

Alongside this mispronunciation,  curiosity over the selection of this letter also led to an eruption of explanations about why the naming skipped quite a few Greek letters and jumped straight from Delta (4th) to Omicron (15th). It turns out, among the ten letters that were “skipped,” eight were used to name variants that were considered less of a public concern, and because they were not as dangerous as Delta or Omicron, they were simply not as widely reported in the news. The other two letters, “nu” and “xi” were purposely skipped, because nu “is too easily confounded with ‘new’ and xi was not used because it is a common surname,” and WHO would like to “avoid causing offense to any cultural, social, national, regional, professional or ethnic groups.”

Now that we are more than half way through the 24-letter alphabet, more and more people have realized the seriousness of this disease. A recent tweet from a medical student at Duke University went viral, with the content saying: “Please vaccinate. I have no desire to learn the entire Greek alphabet.” With no personal disrespect to the Greek language intended, I’m sure, the line was then widely quoted, became a meme, and was printed on shirts by many merchandisers.

As for what will happen after WHO runs out of Greek letters, there is currently no plan, though WHO has suggested that newer variants might be named after constellations. Others have suggested using the Cyrillic alphabet, or using the names of bat breeds, as a reminder of where the virus originated. Whichever the solution, there will for sure be another round of learning, pronouncing and spelling of a new set of unfamiliar language.