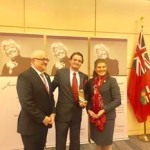 We are pleased to announce that MCIS Chair,  Gautam Nath has been awarded the June Callwood Outstanding Achievement Award for Voluntarism. Gautam received the award on April 26, 2017.

The June Callwood Outstanding Achievement Award for Voluntarism celebrates dedicated non-profit organizations and individuals who, like the late June Callwood, have made lasting and meaningful contributions as volunteers in their communities.

You may also congratulate Gautam directly at gautamnathnath@gmail.com.