‘Tis the season to give back: MCIS participates in #GivingTuesday
The Polyglot Profiles – Veronica Costea 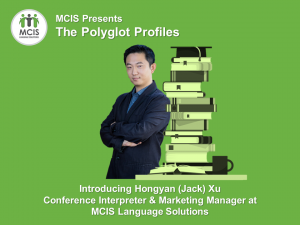 Jack is currently the Marketing Manager at MCIS Language Solutions, and has been with the organization since 2011. His previous positions at MCIS include Freelance Community Interpreter (Mandarin), Translation Coordinator, Training Coordinator, Resource Development Supervisor, Interpretation Services Manager, and Sales Manager. In 2015, as Interpretation Services Manager, Jack successfully managed the Interpreters4Syria project, helping the federal government welcome and settle over 26,000 Syrian refugees to Canada, with a team of 400+ Arabic and Armenian interpreters in Toronto, Montreal and Vancouver.

Aside from his fulltime work, Jack also works as a freelance conference interpreter, desktop publisher, voice talent and Chinese>English translator. In October 2016, Jack was accredited as a Mandarin conference interpreter by the Federal Translation Bureau of Canada. Jack holds a Master’s degree in Conference Interpreting (York University, 2014), a BA in Political Science and a B.Sc. in Statistics from McMaster University.

How did you become involved in the language industry and MCIS?

In 2011, having just completed my second bachelor’s degree, I was working for my parents in their furniture business, but what I really wanted was to break out on my own. After applying to the Ontario Provincial Police, I got to the interview stage, and I was advised by the interviewing sergeant to seek additional work experience outside of family, I looked for something where I could work part time, and gradually transfer my time over. I’ve always had a strength with languages, so my wife suggested I look to community interpreter training.

I trained with MCIS in July of 2011 and thoroughly enjoyed the adult learning classroom environment of the training program. I passed my ILSAT test with a score of 97% and began working as a Mandarin community interpreter. In November of the same year, an opening in the translation department saw me working at MCIS for 25 hours per week, and I officially became a full time staff member in April of 2012.

Did you always think you’d work with languages?

No, not really. I honestly didn’t know what I would be doing, which explains my two drastically different bachelor’s degrees. Even after obtaining those degrees, I had no idea how to job search, so my parents asked me to work for them while contemplating my own future. While working for my parents, I had applied to the Department of Foreign Affairs, the Ontario Provincial Police and York Regional Police, and I had explained that my landing at MCIS was a consequence of one of those interviews.

Only after becoming a community interpreter, did it come into focus that all of my past strengths in areas such as programming, discrete math, logic gates, instrumental music, were all related to a strength in understanding, interpreting and processing grammatical and syntactic information…in other words, languages!

What’s the best part about being a language professional?

First, I get to keep my skills sharp in both my languages – Mandarin and English – and be paid for it! It’s not the same as just speaking a particular language at home, or what one of my professors would call “kitchen speak.” I get to maintain a level of professional practice in both languages, which I hope to pass on to my son. I’ve also heard that people who speak two or more languages are less likely to develop Alzheimer’s disease, so that’s a bonus.

Secondly, I’m exposed to a wide range of topics that I otherwise would never dream of reading up on or researching into. As both a conference interpreter and translator, I am required to read, research, and familiarize myself with a multitude of topics that add to my general knowledge and enrich my life experiences. Of course, conference interpreters travel for work, while translators can travel to and live anywhere in the world and still work for the same clients. That’s a huge bonus.

Of course, I do work fulltime, so I don’t personally enjoy the luxuries I had just described. But working for a Language Services Provider (LSP) also has its perks. I attend multiple conferences each year, happening all over the world, where I get to mingle with friends new and old from the language industry, and have extremely fruitful discussions on the future of the industry.

Where do you see the future of the language industry and your role going?

As someone who identifies as tech-savvy, I welcome the technological disruption occurring in the language industry. Technology brings opportunities. This doesn’t mean blindly believing every Tom, Dick and Harry out there who claims they’ve got the next AI-driven translation solution. But be aware of the claims, be aware of the shifting winds, and have an understanding of when the proverbial waves of a language technology boom will crest in order to ride it into the future.

At the same time, I really believe there are interpretation and translation processes that technology isn’t close to replicating, or replacing, be it today or in the near future. One of these would be conference interpreting, where it’s not it’s not just the language information that’s being processed, but also accents, cultural inputs, and human error elimination. No AI can do that yet. Another area is literary translation. I actually enjoy translating Tang dynasty poetry into English as a hobby, focusing on translating less the full meaning of the words in the verses but more the emotions being conveyed. Again, no AI can do that (yet).

What’s the biggest tip you may give someone interested in pursuing a career as a language professional?

First, “know thyself”. Working as an interpreter requires an extroverted personality, a sharp mind, steely nerves, and a general warmth towards others. A translator on the other hand, requires someone with a tireless and unremitting drive to complete the task at hand, research skills, ability to word process in the target language, and an organized and logical mind to ensure consistency of the work being produced. Of course, both variations of the profession require bilingualism or multilingualism, with the recognition that the learning of any one language – let alone multiple – means diving into a bottomless pool of knowledge that requires a lifetime commitment. But if you enter this field, you will be thoroughly rewarded every single day.