First, Do No Harm: How Language Plays an Essential and Life-Saving Role in Health Care
English 101: The Evolution of English, from Shakespeare to Sitcom 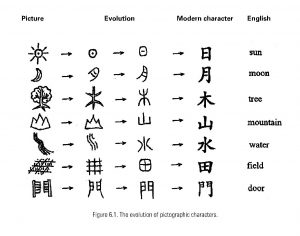 In 2010, the United Nations declared “Language Days at the United Nations”, to celebrate official languages used at the UN. April 20th was declared Chinese Language Day, a date taken from the Chinese lunar calendar called “Guyu”, or the “Rain of Grains”. Legend has it, a man named Cangjie on this day invented the first written Chinese characters based on animal tracks. His wisdom moved the gods, who created a special rain of grains to fall upon the land, saving the people from an ongoing famine.

To commemorate Chinese Language Day in 2019, let’s go through some of the characteristics of the Chinese language and try to understand why UNESCO recently declared Chinese to be the “hardest language to learn in the world”.

The first reason Chinese is difficult to learn is that it’s a tonal language. Multiple characters or morphemes may be pronounced the same in Chinese, but depending on the tone of the utterance, they represent different characters and concepts. Thus, to understand and speak Chinese we must use the area of the brain normally reserved for listening to music. The current official dialect of Mainland China, Mandarin, has four major tones, while the lesser used albeit still popular dialect Cantonese, has nine tones. You might think this makes Cantonese more difficult to learn. However, that’s not necessarily the case. To only have four major tones in Mandarin, many characters and morphemes that normally would sound different in Cantonese now share the same pronunciation as well as the same tone in Mandarin, distinguishable from its other spoken twins only from the utterances and contexts before and after it.

Aside from its audiological complexities, Chinese also has its origins as a pictographic language. Indeed, many of the oldest characters in Chinese were pictographic, such as 水 (water), 火 (fire), 木 (wood), 月 (moon), 女 (female/woman), but these make up only about 4% of the Chinese language. Other characters are ideographic, such as these interesting character pairs: 上、下 (up, down), 凸、凹 (convex, concave); and other ideographic compounds with deep routes in tradition, such as 安 (peace, safety), which is a woman under a roof, implying that peace comes from having a woman under your roof; and the word 男 (male/man), which is composed of the characters for “field 田” and “strength 力” respectively, implying that a man is an agricultural workforce. Of course, modern written Chinese is much more complex. But due to these simple pictographic and ideographic origins, how Chinese characters are written, unlike alphabetic languages, has nothing to do with how these characters are pronounced. Every association between a written character and its pronunciation must be committed to memory. I recall being in grade school in China; each year, the Chinese language textbook would list several hundred new characters we had to commit to memory in order to advance in this language. At the time, it was a common consensus that knowing 3,000 characters was enough for conversation while knowing 30,000 was deemed mastery of the language.

Aside from the disconnect between written and verbal processing, most people are also familiar that there are currently two mainstream written systems for Chinese – Simplified and Traditional. Some think there a simple correlation between these two written scripts and the two common spoken tongues, Mandarin and Cantonese. These people would be mistaken. The reason for the existence of two mainstream written scripts, like many complications in the world today, are historical and political. In 1897, China was forced to sign the administration of Hong Kong over to Britain, resulting in 100 years of British dominance over Hong Kong and a segregated cultural evolution for the port city. It therefore retained Traditional Chinese. Fast forward to 1949, after decades of civil war between China’s two major ruling parties at the time, the Communist Party and the Nationalist Party (Kuomintang), the latter was forced to retreat to Taiwan and establish its own ruling regime. The divided China issue remains unresolved today, and one consequence was that Taiwan retained the use of Traditional Chinese. Now, being a non-alphabetic language, people could not deduce how to read or write Chinese simply via listening and speaking, so a large member of the peasant class in China were illiterate. Thus, in 1956 the Communist Party’s state council initiated the full implementation of the Simplified Chinese script in Mainland China, with the general purpose of improving language literacy. This was viewed by many in Taiwan and Hong Kong as a sacrilege upon China’s historical traditions. In fact, many in Taiwan today call Traditional Chinese a different name – Proper Chinese. Throughout history, however, the Chinese language had in fact, been simplified then complicated, many times over. There used to be hundreds of ways to write a certain character, and it literally took genocide and book burnings in China’s history to unify the language to even its disunified state today. Currently, simplified Chinese enjoys widespread usage in Mainland China, Malaysia and Singapore, while Traditional Chinese is the official script in Taiwan, Hong Kong, Macau, and more commonly used among older generations in overseas Chinese communities.

Let us now discuss specific challenges the Chinese language presents to translators and interpreters. Spoken Cantonese does not actually match word for word to either of the two mainstream written scripts, in grammar, sentence structure, or even vocabulary. Hong Kong uses a system of written Cantonese, which has many characters and morphemes that do not even exist in official Chinese, but this written system is rarely used outside of Hong Kong; normally, when you watch a movie or TV program in Cantonese, the captions at the bottom aren’t actually the exact words which the actors or actresses are saying, as Cantonese is mainly a verbal dialect. The captions are in fact, adapted scripts composed in Traditional Chinese, following Mandarin grammar and vocabulary. This means, translators cannot produce an exact audio script from English for the purpose of a radio spot or any voice recordings in Cantonese, because the words on paper will not match what the voice artists will be saying. The voice artists will always need to adapt from the written script into colloquial verbal Cantonese.

An added layer of difficulty for interpreters, is that Chinese has always been grammatically correct without employing a subject in a sentence. So, interpreters constantly struggle, especially during simultaneous interpretation, to superimpose subjects into phrases when interpreting from Chinese into English, quite often the added subjects would be “I”, “we”, or in many instances “it is”.

So, does all this mean that Chinese was designed to be difficult to learn in every regard? Are there no facilities that make the language easier? Not so. Once you surmount all the challenges outlined above, and get used to Chinese grammar, you will discover that for Chinese, by being a pictographic and ideographic language, expanding your vocabulary is incredibly intuitive. For example, the word for field is 田, which looks like a field; the word for rain is 雨, which resembles water falling from the sky. Therefore intuitively, the word for electricity, in traditional Chinese, is 電: a lightning strike during rain penetrating the field. Incredible, isn’t it? In addition, being a logographic language and each character carrying a meaning, means that new words are quite often intuitively formed from existing characters, so knowing the meanings of the individual characters makes deducing and absorbing new words easier. For example, continuing with the previous example 电 (electricity, this time in Simplified Chinese), and 脑 which means brain, therefore the word for “computer” in Chinese is 电脑, i.e. electric brain. Isn’t it just fascinating? A person in English, who had never encountered the word “computer”, would need to inquire or look up the meaning once. But the Chinese word for it is so intuitive that learners can readily guess what it means. Other examples include 电梯 = electric ladder (elevator); 手雷 = hand thunder (grenade); 照相机 = image capture machine (camera); 望远镜 = gaze far lens (telescope); 阳台 = sun platform (balcony); 房顶 = house top (roof).

All in all, Chinese is a fascinating language, carrying over 5,000 years of unbroken history and culture, traditions, political and historical meddling, external influences, and more recently, disruption of the digital age. To learn this incredible language, you will need an aptitude for melodies, a good memory, a vivid imagination, and most importantly – if your mother tongue is an alphabetic language – to forget everything you’ve ever known about how a language works, and be ready to brave a whole new frontier of cognition. I invite you to accept the challenge!